The history of Russian copyright protection societies comprises over 140 years. The first Russian society managing authors’ rights of on a collective basis was “The Society of Russian Dramatic Writers” founded by the prominent Russian playwright Alexander Ostrovsky on October 21, 1874. The playwrights set up the Society for the protection of their economic interests in cases of public performances of the plays in the Russian Empire theatres, and obliged the theatres to pay remuneration to the authors of the plays. On October 21, 1885 some composers joined the organization, thus forming “The Society of Russian Dramatic Writers and Opera Composers”. 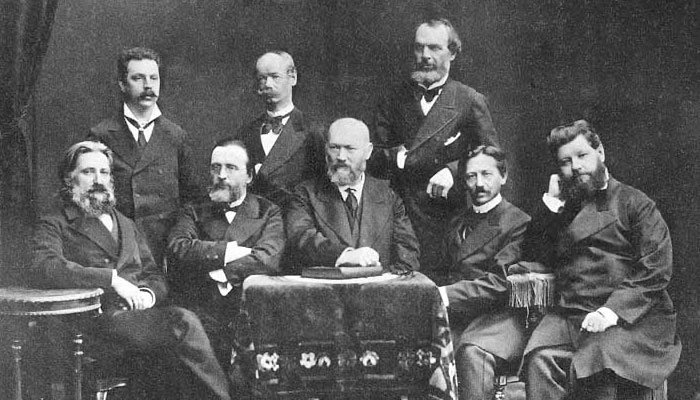 Meanwhile the Society has been transformed over and over into new organizations, acquiring new names and titles every time, however the chief goal of all these organizations regardless their names has always been protecting authors’ interests. Following the Revolution of 1917, USSR has witnessed the formation of various unions with the departments for the protection of the authors’ rights. Each of them managed its own sphere of copyright. 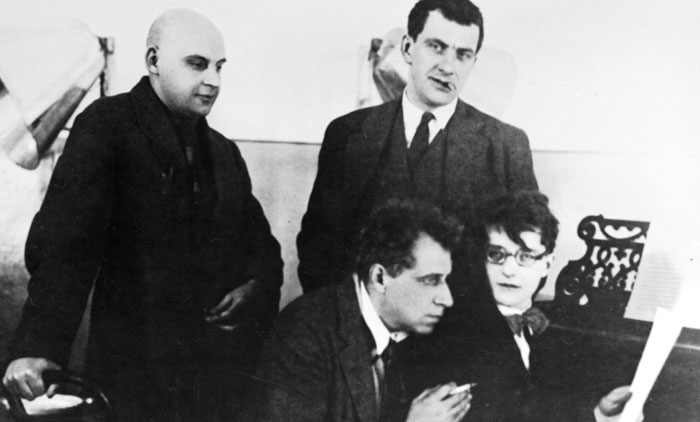 Within the years of the Soviet regime formation the activity of collecting societies has substantially declined, it just could not be performed in the same quantity as before neither in Moscow nor in Petrograd. The Society of Russian Dramatic Writers and Opera Composers in Moscow was the first to step on the way of reorganization. In 1924 at the general meeting of the Moscow Society of Dramatic Writers and Composers (MODPIC) the Board was re-elected, and V.B.Nemirovich-Danchenko was appointed its Chairman. In 1928 the All-Russian Central Executive Committee and the Soviet of People’s Commissioners of the USSR issued a Decree “On the Fundamentals of Copyright” – the first copyright legislation of the whole Soviet Union. In 1930-ies in USSR the first steady royalty fees for public performance were set by the Government and the authors of the “small forms” works started to receive their remuneration for the performances of their works at concerts, circuses and so called “combined” programs. The royalty fees for the demonstration of movies in cinemas and the accompanying music were also introduced. In 1930 the Moscow’s and Leningrad’s organizations merged into the All-Russian Society of Playwrights and Composers, which was renamed in 1933 into the Office for Protection of the Rights of Authors at the Union of Writers, and in 1938 – into the All-Union’s Office for Protection of Rights of Authors (VUOAP) as the organizations of Ukraine, Transcaucasia, Middle Asia and Belorussia have joined it. The goal of VUOAP was to protect the rights of authors in cases of use and public performances of their works. Besides that VUOAP was entrusted to collect remuneration from publishers and entertainment events on behalf of Literary, Musical and Journalists Funds of the USSR. 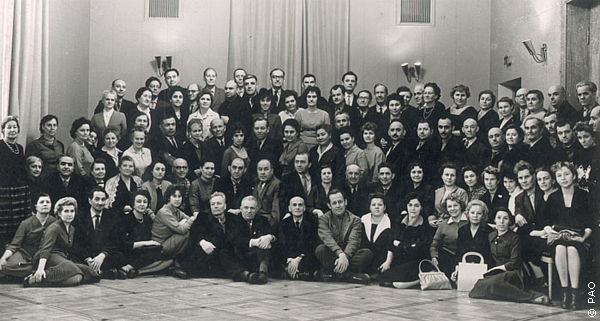 Later on the basis of VUOAP by the Decree of the Soviet of Ministers of the USSR the creation of the All-Union’s Agency of Copyright (VAAP) was approved. It was done due to the necessity for the USSR to join the Universal Copyright Convention. All creative unions and a number of organizations – users of authors’ works – became the founders of the new organization. In 1973 USSR has introduced all necessary amendments to the country’s legislation and joined the Geneva Copyright Convention. VAAP covered all spheres of copyright and became the authoritative copyright protection organization – member of the International Confederation of Societies of Authors and Composers (CISAC) – international non-governmental organization uniting most of the foreign collective management societies. 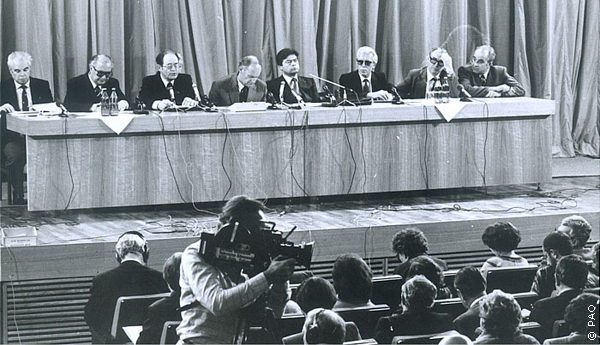 Meeting of the Council of Founders of VAAP. Moscow, 1973.

In 1991 the “Fundamentals of the Civil Legislation of the USSR and the Republics” were adopted, which significantly changed the contents of the copyright legislation and introduced the term “related rights”. Subsequently on May 14, 1991 the Soviet of Ministers of USSR issued the Directive on the creation of a state organization on the basis of VAAP, which was named The State Agency of the USSR for Copyrights and Related Rights (GAASP) which in its turn retained all rights and functions of VAAP.

However, when the actual transformation of VAAP into GAASP wasn’t yet finished, on February 24, 1992 by the President’s Decree the Russian Intellectual Property Agency (RAIS) was created. It was also a state organization and should have, among the other functions, developed the proposals and implemented the state’s policy in the sphere of copyright protection.

Within the framework of executing the said functions the experts of RAIS prepared a draft of a special Law of the Russian Federation “On Copyright and Related Rights”, which was developed with consideration of the current Russian legislation, international treaties and also the foreign Copyright Laws, particularly French one. It came into force on August 3, 1993 and contained the section devoted to the collective management of copyrights.

The Society is governed by the Authors’ Council. It makes all essential decisions related to the organization’s activities.

Russian Authors’ Society is a successor of all previously existing organizations for collective management of rights in the sphere of intellectual property.

The Society acts on the basis of voluntary and equitable membership. From year to year Russian Authors’ Society shows effectiveness and usefulness of its activities. RAO is the unique and the biggest public organization in Russia uniting composers, lyricists, playwrights, scenographers, translators, choreographers, artists, authors of decorative art and scientists, and also the legal successors of authors.

One of the most important parameters of RAO’s activity is the annual growth of the number of its members. In 1993 there were some 4,000 members, nowadays their number reached 26,000. Beside that RAO manages on a contractual basis the rights of such an important category of rightholders as music publishers.

On August 15, 2008 in a manner prescribed by the law Russian Authors’ Society got the state accreditation for conducting activities on copyright management on a collective basis specified by subclauses 1 and 2 of the clause 1 of the Article 1244 of the Civil Code of the Russian Federation:

The following criteria have been considered while taking the decision on granting of the state accreditation: the biggest number of Russian authors and foreign collecting societies having the respective contractual relations with RAO, vast repertoire of music which RAO manages on the basis of these contracts, the number of employed experts with significant experience in the sphere of collective management of copyrights.

On August 15, 2013 in a manner prescribed by the law Russian Authors’ Society got accreditation for conducting its copyright management activities on a collective basis specified by subclauses 1 and 2 of the clause 1 of the Article 1244 of the Civil Code of the Russian Federation, and it was prolonged for 10 years. The Accrediting Commission made this decision having considered the merits of the Society among the rightholders. For the last five years of its work as the accredited organization RAO has proved its effectiveness with growing royalty collections and its payment to rightholders from year to year.

RAO intends to increase the effectiveness of its work along the whole cycle of collection, distribution and payment activities, which would allow the Society to create the system mostly beneficial for both rightholders and users.